Tambah Komentar Edit
Pizza π (Pizza Phi) brings a different concept in selling pizza. The restaurant is in the form of a ship that sailed around the island of Saint Thomas, Caribbean Islands!Tara and Sasha establish Pizza π in November 2014. The pair utilizes a ship (boat) that has been abandoned almost one decade. They fix the dilapidated condition of the ship and turn it into a pizza kitchen.

Sasha who had studied mechanical engineering at the same time take advantage of his knowledge of tutorials on YouTube to make some features. Such as ventilation systems, producing clean water, and put the dough mixer and electric oven in the ship until a solid and not wobbly. 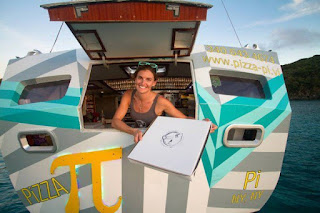 "Food trucks have become part of everyday life, but the food boat yet. We know this concept is weird but we think this could go for pizza familiar with a lot of people," said Tara to Oddity Central on the grounds of making pizza boat.

Tara and Sasha first met while working together on a yacht. Tara works as a gourmet chef, while Sasha as captain. Second career success. Moreover Tara who won a culinary contest the British Virgin Islands (BVI) Charter Yacht Show as much as two times.

The pair married in 2012 decided to quit his job and founded Pizza π. A month before the operation, Sasha learned to make New York-style pizza at Goodfellas cooking school. He learned to make pizza thin crispy nan.

Armed with this knowledge, Pizza π is now offering a variety of pizzas like Sweet Home Indiana with sausage, corn, white sauce and arugula; The Blumin aiolo Onion with lemon, leeks, blue cheese, and honey; and The Dalai Lama is the favorite because it uses a variety of toppings.

Menu pizza made from fresh local ingredients and changed every 3 months. If you want to order, customers can contact the vessel via radio, calling from a mobile phone, or even email. Pizza and can be taken directly or sent to locations around Christmas Cove.

Pizza π operates every day from 11 am to 6 nights. Within a day, Tara and Sasha on average make 25 pizzas for 20 customers. On busy days, they even approached 30-40 other marine vessels.

But that also means that π Pizza Pizza Pie serves only order pizza in mid-November until the end of July. Three months remaining for rest as it enters hurricane season.

Going forward Tara and Sasha wants the restaurant to be operational 7 days a week. They also plan to recruit more employees as orders increase.