Tambah Komentar Edit
China is now starting to make new potatoes as a staple food. Therefore, a festival will showcase 100 kinds of processed potatoes.China Potato Expo 7th held in Kunming, Yunnan province in June. According to the Ministry of Agriculture, there are 100 elected national potato dish from the rest of China to be exhibited there.

Reporting from China Daily, the choice of food got a recommendation from individuals, restaurants and food companies. The selection process lasts until March 31. Dishes are selected will be compiled in a book. 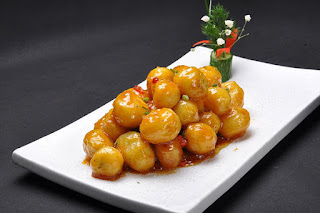 The move is part of the adjustment of agricultural crops in China. The country aims to have 6.66 million hectares of land to grow potatoes in 2020. It is due to the development of the potato industry guidelines issued by the local Department of Agriculture on 23 February.

The new guidelines establish a potato became the staple food in China's fourth after rice, wheat and corn. There are nine pilot provinces including Beijing, Hebei, and Inner Mongolia that has begun to experiment. Beijing, for example, has 200 supermarkets sell dumplings made of potato starch.

"Make the potato as a staple is a significant step in wiping out poverty, but it means more than that. Not only the means to feed the people with it, but also make it more useful by submitting it to the production line. Potatoes can be processed to be more nutritious with more flavor tasty and a wider variety, "said Ma Zhongming, a member of the CPPCC national committee, in an interview with ce.cn on.

The consumption of potatoes has many benefits because potatoes are rich in fiber, fat-free and high in potassium. Can help prevent excessive food intake while increasing the intake of calcium and protein.