Tambah Komentar Edit
The power of brain function may decline due to inadequate intake of essential nutrients. As the emergence of dementia or Alzheimer's disease. So select nutritious foods that can strengthen the ability of the brain.Dementia and Alzheimer's disease generally affects the elderly. But now the younger patient age. Decreased ability of the brain such as weakening of memory, brain disorders and death of nerve cells.

Although it is not certain how the prevention of this disease, but there are some healthy food recommendations as reported by the Telegraph (11/03) who is able to strengthen brain function and prevent Alzheimer's and dementia. 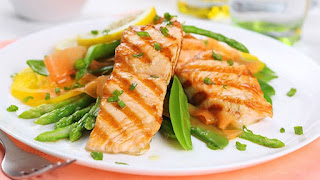 1. Milk
A recent study revealed that the consumption of three glasses of milk every day can help prevent Alzheimer's and Parkinson resulting in damage to brain cells.

Researchers at the University of Kansas Medical Center also found people who often drink milk has higher levels of antioxidants or glutathione in the elderly. Glutathione is believed to help prevent oxidative stress and damage to the brain.

Studies have found that people who eat large amounts of broccoli have a better memory. Broccoli is also rich in folic acid which helps ward off Alzheimer's disease. Lack of folic acid in the body can lead to depression.

Research in 2011 from Dundee University found that substances contained sulforaphane in broccoli can also help the brain better performance in the future.

3. Blueberry
Research from the University of Manchester proved that eating purple fruits, such as blueberries may help prevent Alzheimer's disease. The purple color on the fruit is believed to be able to absorb the harmful iron compounds.

The majority of diseases that weaken the memory in part caused by iron, which could eventually lead to the production of harmful toxins that damage the body, such as Alzheimer's, Multiple Sclerosis, and Parkinson's.

4. Kari
A study in 2009 found that eating a curry containing turmeric for once or twice a week will help prevent Alzheimer's disease.

A health adviser, Professor Murali Doraiswamy said that the content of curcumin in turmeric can prevent the spread of plaques in the brains of Alzheimer's patients.

5. Fish
According to research from the University of Alabama in 2013, people who undergo the Mediterranean diet with a lot of consumption of fish, vegetables and unsaturated fats 19% smaller experiencing a disruption of brain function. Consumption of fish rich in Omega-3 fatty acids such as salmon, mackerel, herring, trout, and sardines can reduce the risk of dementia.

Instead, reduce the consumption of saturated fats, such as red meat and dairy products. This will help in the prevention of dementia disease conditions.