Tambah Komentar Edit
Doughnut or donut apparently favored as food hybrid. Once combined with croissants so cronut, there is now a donut cone. Donat was adapted from Prague.Good Food Coffee and Bakery in Prague introduced a unique sensation of eating donuts. Named "Doughnut Cone." These donuts can be filled with a variety of fields ranging from chocolate, cream to ice cream. 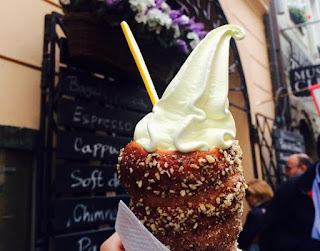 Trdelniks a tradional cakes and sweet cakes coming from Romania. Trdelnik made from dough-like pastry which is then rolled on the cylinder rod and baked goods. Once cooked, the dough is sprinkled with sugar mixed with cinnamon or walnut.

Trdelnik also known as "Chimney Cake". This dish is popular with tourists and has a lot of versions of stuffing. There containing fruit shavings, raisins, chocolate to strawberry and whipped cream. Also available savory flavors such as ham and cheese for those who do not like the sweet taste.

The form is easy to handle and portability make this a practical food could be dessert 'on-the-go'. Not only adults but young children are also fond of this cake.

In contrast to the capital city of Prague Ceku namely, Jakarta also has a similar dish. Bread named pipes, you can find it on the Food Container, Lebak Bulus.

This bread is sold by the tenant Pipabites. Although the shape of a cone but not as big pipes are large and small. Can be sweet or savory stuffing.