Tambah Komentar Edit
The density of the population of New York made a lot of food delivery services have sprung up. But unlike Eat Offbeat employing refugees as a chef.American Refugee Resettlement Agency is through the International Rescue Committee who recruit refugees to be employed as a chef at a new startup company, Eat Offbeat. Recruitment criteria are those whose hobby and experienced cook, even if only for their own families.

Currently there are three chefs on duty serves specialties from their respective countries. They come from Eritrea, Iraq and Nepal. 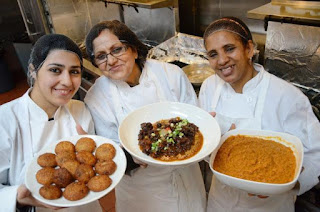 Eat Offbeat itself didirkan two brothers Manal and Wissam Kahi who are immigrants of Lebanese origin. Manal moved to New York in 2013 to study at Columbia. He was inspired to establish a business because they can not find food favorites like grandma's homemade hummus in Syria.

Then Wissam, who works as a management consultant advised his brother to establish Eat Offbeat. The idea of ​​selling hummus eventually turned into a food delivery service when the two meet a professional chef Juan Suarez de Lezo. Initial funding for the startup is derived dariCenter for Social Ventures at Columbia.

"All the talent of cooking here the original of each country. Juan did not interfere in the recipe at all, it only guarantees the quality of food," said Kahi, as reported by the Huffington Post.

Eat Offbeat is currently still in the stage of soft launching and only serve a large group of about 10 people. Manal and Wissam Kahi even drove his own car booking menu.

Each menu consisting of 3-4 dishes a chef sold 20 USD one serving. The next few weeks, the two brothers are planning to open an individual order for Manhattan residents through their site.

In cooking, the chef creative in shared commercial kitchen in Long Island City. They are currently working part-time, but with the increasing order, they may be working full.

Kahi said that the most popular food Eat Offbeat today is Cauliflower Manchurian. In the form of spices fried cauliflower and sweet spicy sauce added. The menu is made chef Rachana Rimal of Nepal.

The final goal of the Eat Offbeat is providing employment for refugees who have ability.