Tambah Komentar Edit
Domino's recently introduced DRU. In the form of robotic vehicles that reduce the need by the pizza delivery man. The trial was conducted in New Zealand.Domino's has made a pizza delivery robot vehicle that could bring the food directly to the house. ARS Technica reports mention a tool called Domino's Robotic Unit (DRU) with four wheels that has a height of one meter.According to the company, has been successfully deliver pizza DRU first time trial on March 8.

"We believe someday DRU will be an integral part of the Domino's family. He is a path to the future and membaut we are eager to explore further," said Domino's general manager New Zealand, Scott Bush. 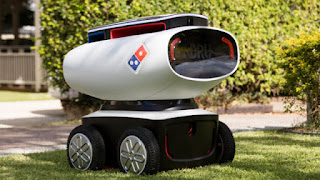 Development of the vehicle began in Australia in 2015. Driven by the central laboratory for the commercialization of innovations Domino's based in Australia, DLab.

Ability was also included in the DRU. Presence sensor makes the robot can avoid obstacles.

DRU has two different compartments to make drinks cold and hot pizza awake. For pizza, each DRU can accommodate up to 10 pizza. Later, the consumer can open the compartment with a specific booking code.

Robot wearing battery power. This tool can bring a shuttle with a distance of 20 km from the shop. Only then the battery needs to be recharged. DRU was designed to move well on footpaths and roads.

There are no further details about the security robot. However, the company calls on its Facebook page that they take protective measures were needed to ensure DRU stay safe. Including security and surveillance.

"This is an exciting opportunity for New Zealand. Over the last 12 months I actively and aggressively promoting New Zealand as a trial for the new transportation technologies," said transport minister of New Zealand, Simon Bridges, as quoted by AFP (18.3).

As for New Zealand devising regulations related to the vehicle without a driver, such as the DRU, which is designed to operate either on the road or footpath.