Disability tomatoes and Improper selling Could Changed So Power Source

Tambah Komentar Edit
Many supermarkets throw a tomato that looks flawed because it is not worth selling. Scientists utilize these tomatoes to be processed so the power source.Innovative pilot project in Florida, United States of America is being done by scientists. They believed tomatoes can be used as a power source to illuminate the Disney World complex covering an area of ​​69 square kilometers over the three months of the year. Including hotels, playgrounds, golf courses and shopping centers.

This project can also help solve the problem of waste tomatoes in Florida, which reached 396,000 tons a year. Tomatoes are usually disposed of in landfills and waterways until caused significant environmental problems.

Quoted from the Independent scientists use bacteria to break down and oxidize tomatoes disabilities. The chemical reaction produces electrons which are then captured in the fuel cell and can be a source of electricity. 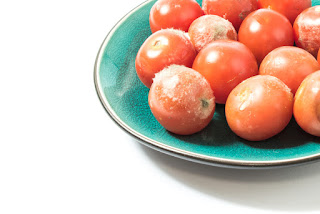 Tomatoes are very suitable processed into a power source because it contains the red carotene pigment. Scientists say the pigment into the perfect catalyst for generating electric charge.

"Tomatoes are flawed and broken left over from the harvest can be a very powerful source of energy," said Namita Shrestha, a PhD student at the School of Mines and Technology, South Dakota involved in the project.

The leader of the team of scientists, Professor Vankataramana Gadhashetty said, "We want to find ways to treat this waste. When tomatoes dumped, tomatoes can produce methane (a greenhouse gas that is strong). Garbage tomatoes also can make water treatment problems when dumped into waterways."

Gadhashetty recognizes the amount of electricity produced from tomato waste is relatively small. But with further research and development, the energy produced can be increased many-fold.

He plans to improve the performance of fuel cells to determine which parts are slowing the flow of electricity. Do electrode, bacteria, or cable. Once known, Gadhashetty will overcome it.

The findings of this pilot project was presented at the National Meeting and Exposition of the American Chemical Society 251, San Diego. The team of scientists also included researchers from Princeton University and Florida Gulf Coast.

Electrical project of this tomato is innovation in the world of renewable technologies to prevent global warming. Scientists agree the importance of the world switch from fossil fuel power sources to low carbon-based power sources to save the environment.