Tambah Komentar Edit
The Telegraph reported the Austrian coffee company, Julius Meinl back sponsoring the distribution of free coffee. When first free drink deals launched last year there were more than 100,000 people participated, according to the company. 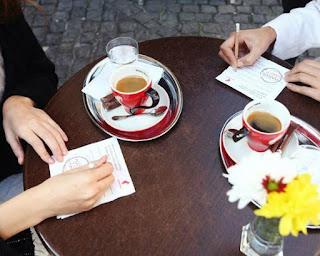 In the official website of Meinl Coffee mentioned places involved giving free coffee or tea when the activities of the "Pay With A Poem". Including Europe, UK, USA, Australia and Asia.

"On March 21, Day of Poetry World, we let the imagination wander. We envision a place where money is replaced with feelings. A better world. For one day, we change the currency in the coffee shop around the world. And the coffee or tea Julius Meinl will paid with the poetry you, "said the company.

Poet and conceptual artist, Robert Montgomery, has joined the company as Global Ambassador. He will help celebrate the contributions of poetry gathering of the community and turn it into a public art is still a secret location in London.

"I am pleased Pay With A Poem gives little freedom on the bag, where the money is replaced with a poem. Instead of using paper money or credit cards, people can transfer the value to the poem, and use it as an alternative form of payment," said Montgomery.