Tambah Komentar Edit
Earthquake disaster turned out to give a new perspective on the chef Massimo Bottura. Chef of the 3 Michelin star restaurant even this social action through parmigiano reggiano cheese.The earthquake that occurred in May 2012 in Modena, Emilia-Romagna, northern Italy have an impact on the industry Parmigiano Reggiano cheese. Hundreds of thousands of cylinders old Italian cheese is also a mess.

As chairman of this committee cheese maker, chef Massimo Bottura can not stay silent. He thought hard to figure out how to save 360,000 siinder Parmigiano Reggiano cheese that was not damaged. The factory can operate again. 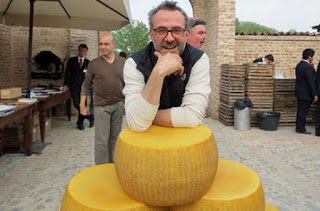 Parmigiano Reggiano is one type of parmesan cheese, old cheese Italy. In Italy, this cheese is produced from the region Emilia, Modena, Bologna, Parma, Reggio and Mantua. Made from cow's milk and cured a minimum of 12 months.

This cheese is protected by legislation in Italy. Only cheese from the region are entitled to install labal 'parmigiano reggiano ".

As a chef, Massimo think hard to create a meal that could include all natural products that were damaged by the earthquake.

'Not just a prescription but must be able to represent Italy completely. Also convey the mission to rescue the Parmigiano Reggiano cheese and rice earthquake victims ", said Massimo vigorously
First he looked for a way to show this cheese in a different way. And he grated parmigiano cheese and soaking it in water, after boiling with a temperature of 55 C -85 C and then stir until creamy. Then stored in the refrigerator overnight.

When he woke up to find a solution of the cheese has been separated into 3 layers. There is a milk protein at the bottom, in the middle viscous broth and cream Parigiano at the top. This cheese made from skim milk so that they last taste of milk.

Then the chef Massimo roast rice from small villages affected by the earthquake. Then the broth was poured last cheese and Parmigiano cream given layer.

To unify the northern part of Italy, known as rice and pasta and pizza in southern Italy, he is serving risotto in the form of pizza.

Representing pizza, risotto formed round, at the bottom by cream, tomatoes, anchovies and oregano represents pasta sauce. Risotto was formed round and eaten by the way is divided into four segments like pizza.

Al dente texture of the rice in the right maturity, slightly crunchy in the middle. Mild creamy sauce dressing accented with tomatoes and fresh oregano establish harmony right flavor in the mouth.

On October 27, 2012, held 'Parmigiano Reggiano Night' in all of Italy. Characterized by dinner 'Slow Food Movement' in Turin. Risotto is also cooked by 40,000 people. Expressed in Japan, America, France and in various countries around the world. Of course, with cheese from Modena.

As a result, 360,000 cylinder Parmigiano cheese sold out. The cheese industry was saved. The cheese factory to resume operations, as well as farmers in Modena. 'This is for example the recipes can be a social movement,' cap Massimo.