Tambah Komentar Edit
Although it looks creepy but insects have many benefits. In addition to environmentally friendly, caterpillar insects such as crickets to nutritious food can also be the future.According to the Food and Agricultural Organization (FAO) and Agriculture of the United Nations (UN), the edible insects contain high-quality protein, vitamins and amino acids for humans.
Besides having a high nutritional value, the insects also can reduce damage to the planet from more conventional sources of protein such as meat.

According to CNBC FAO states that the insect has a "high level of food conversion". F or instance just crickets need six times less feed than cattle. So that insects can help reduce the greenhouse effect and can be cultivated in organic waste. 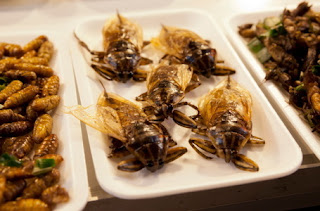 In France, there is one company that is now utilizing insect on a large scale. Ynsect is a company that uses insects as bioconvert organic substrates such as byproducts of cereal and transform the insects into nutrients sustainable resource for agro-industry. The company has been experimenting to find the best insect species for producing protein powder from the insects in large numbers.

"Ynsect has worked on numerous studies of insects in research and development labs, but we have chosen a species to be introduced at p asar are beetle larvae," said Antonie Hubert, CEO Ynsect told CNBC.
"We can find these insects everywhere. The composition is really a bit like fish and poultry, as well of course it feels good," added Hubert.

Now more people are aware of the potential of insects as a source of nutritious food, and could be an alternative source of high protein foods other than meat.

Thanks to the popularity of its nutrient content, in France also began to be developed pasta with a powdery material, namely insect cicada. With brown color, the paste contains high levels of protein.