In 2005, Tim Burton directed the film Charlie and the Chocolate Factory by cooperating with Johnny Depp as the main actor. No doubt, many children are so familiar with the story of Charlie visiting belonged to Willy Wonka's chocolate factory. 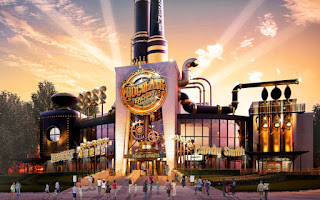 Factory depicted so much fun with the human dwarf named Oompa-Loompas as employees. There is also a river that flowed sweet chocolate taste good.

Quoted from Metro the menu include steak, seafood, pasta, and burgers. There is also a delicious sweet dessert such as pudding, salted caramel flan, chocolate brownies, and S'mores.

Milkshakes and sundaes will be a menu mainstay Toothsome Chocolate Factory. Some of the options available are Chocolate x5, Bacon Brittle, Espresso Buzzzz, Red Velvet and Key Lime Pie.

Bacon Brittle, for example, in the form of ice cream with bacon brittle bacon, bacon chocolate, caramel and bacon. While Key Lime Pie in the form of a milkshake with a slice of pie on it. Nyamm!