Tambah Komentar Edit
White bread is considered unhealthy due to trigger an increase in blood sugar quickly. As an alternative, there is now a purple bread more slowly digested and rich in antioxidants.Professor Zhou Weibiao, food researcher at the National University of Singapore, said the white bread is digested too quickly so make your blood sugar soaring. Consumption of white bread was also reportedly linked to obesity.

To overcome this, Zhou creates purple bread. Purple color derived from the extract of anthocyanins in black rice. The extract is then inserted into bread dough. 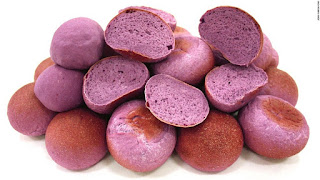 Quoted from CNN purple excess bread is rich in antioxidants that prevent cancer efficacious. The bread is also made from natural ingredients and 20% longer to digest than regular white bread.

Zhou told the reason behind this purple bread making. "The challenge is to see if we could change the formula without changing the fine texture of bread white bread favored by many people."

When mengesktrak anthocyanins in black rice to get the color purple, he left the nature of the starch. "The capacity of the health benefits of antioxidants and anthocyanins has long been known, but knowledge about the use of anthocyanins as food is still very limited," said Zhou.

Adding anthocyanin not only change the color so purple, but also reduces the rate of digestion of up to 20%. The surplus again, 80% of the antioxidant content is maintained even though the bread is baked at a temperature of 200C.

Zhou said, "If you want to enjoy the texture of white bread and restrain the rate of digestion, eat (bread purple) is probably the best formula. And the color is not bad."

Anthocyanins are naturally occurring pigments found in fruits and vegetables such as purple potatoes, grapes, and blueberries. "However, not all natural foods are superfoods purple," Zhou said while giving an example of the purple dragon fruit.

Regarding the number of calories, Zhou explained purple eating bread the same as eating regular bread containing starch and wheat flour. "However, the main point is the slow release of energy that you use the calories in a longer time," he explained.

Currently purple bread not sold on the market, but Zhou has approached the producers of food for immediate launch.