Tambah Komentar Edit
"Borgue is a company guard dog. Its breed is 1/2 Rottweiler and 1/2 German Shepherd. During its puppy stage, Borgue is meek, mild and gentle just like any ordinary dog that you can see tag along by its owner in the park. He was trained to obey basic commands like: stay, fetch, and the fancy roll over. He was even further trained to bring his toiletries in his mouth when its time to go to bath. He is the best pet to have during his juvenile years. A very obedient dog indeed but his obedience fades and eventually vanished forever when he reach maturity. This was because every time Borgue is sent to his kennel to rest in the evening employees who are rendering over time would go to his lair and startle his sleep by patting heavily on its closed quarters, others would pour water on his forehead to keep him awake.

Years pass and Borgue turned into a humongous beast, and eventually the office was transferred to a different location due to expansion. A location that is 3 hectares wide with 2 security guards to patrol the premises. A pretty big space for two patrol guards. Thus, Borgue was called for additional assistance. With Borgues's dark past and bad up bringing there's no question that his ferocious attitude is just timely for the job. Borgue is very alert at night and would patrol the area just like a security guard would do. Keen sensitive eyes, smell and hearing would simply spell doom to any intruder that would come in be it animal or human alike. 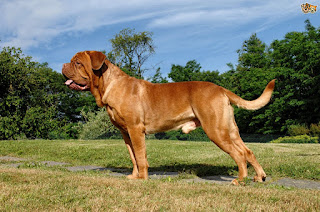 I can remember vividly the incident that happened on the eve of 2008 when a stray dog went inside the premises of the company, It was like watching a great white shark stalking a penguin in a documentary film. Borgue was aiming his site to the dog without blinking or moving a muscle and suddenly dashes to the victim biting its neck and trashing it everywhere, and in a few seconds its over living the body lifeless.

Borgue is truly a killer, but not born to be one. He was taught to be in the wrong way due to the harsh treatment that he had when he was still a puppy.

in my own personal opinion, not one puppy is born fierce though they evolved from the wolves. They do have animal instincts that made their survival astonishing. It's just that with proper pet rearing you could change it's temperement and could be the best pet to have and keep."