The History of The Dog Collar - Dog Collars Through The Ages: A Short History

Tambah Komentar Edit
"The relationship between man and dog is a very long one. Most people do not realize that before man domesticated animals such cows and chickens, we hunted for our meat with our canine partners. Remains of dogs have been found buried next to those of their masters that date back 12,000 years or more. Our relationship goes back a very long time, but have we always adorned them with collars? The History of The Dog Collar - Dog Collars Through The Ages: A Short History 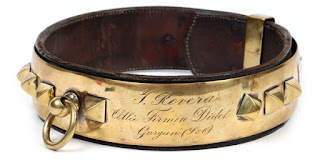 In order to look at some of the oldest collars, we have to examine one of the oldest known civilizations, Egypt. Egyptian devotion to the feline is well known, but the average citizen of Egypt adored dogs, too. Dogs were considered protectors and hunters by the Egyptians and were often used to help a hunter track and take down game. As with most things the Egyptians held precious, hunting dogs were mummified and buried along with their owners to serve them in the afterlife. Archaeological evidence has provided us with some excellent examples of Egyptian dog collars. Collars such as these were crafted of leather and beautifully decorated.

The Greeks were often shepherds and used sheepdogs to help guard their flocks. Greek sheepdogs wore a leather collar studded with sharp spikes. This collar was called a melium. The melium was designed to fend off the bites of a wolf or other animal that attacked the dog while it defended the flock.

Some of the best evidence of dog collars comes from the plaster cast of a dog which was killed in the eruption of Mount Vesuvius in 79 AD. Although the actual body of the dog is gone, a plaster cast was taken from the void in the volcanic ash where he died. The plaster cast is an exact representation of the dog and clearly shows a thick collar around his neck. Modern day examination of the collar discovered that it was inscribed with a message. The message indicates that this heroic dog once saved his master from an attacking wolf.

By the Middle Ages, dogs were still more used for protection, hunting and herding than for simple companionship. Medieval artwork shows hunting dogs of the time with simple leather collars and sheepdogs with spiked collars. A popular sport in the Middle Ages was wolf baiting. Dogs would be fitted with a spiked collar and be pitted against a wolf in a fight.

The rise of the middle class brought dog ownership within reach of the people. Dogs more often were pets and not workers. Leather collars with metal identification tags were the norm. Wealthy dog owners often adorned their dogs with much fancier versions.

Modern dog collars often reflect the personality of the owner. Collars can be simple leather strips, fancy colored cloth or electronic collars that teach a dog not to stray. Construction ranges from plastic to environmentally friendly material such as hemp or cotton.

Although dog collars have changed over the years, it is clear they will never really go out of style."

Belum ada Komentar untuk "The History of The Dog Collar - Dog Collars Through The Ages: A Short History"