Tambah Komentar Edit
"Golden Retrievers are sunshine on four legs. They are one of the most popular breed of dogs around and here are 5 reasons why they are such a wonderful choice.

Loyal---When you look up the definition of this word in the dictionary, there is a picture of a Golden. (Sorry did you think this was going to be an objective article about this breed?) They may be friendly but they know who their hearts belong to. Their devotion to their people is steadfast and true.

Intelligent---You have only to take them to an obedience or agility class to really appreciate their ability to learn. Of course, a large part of their success will depend on the human who is teaching them. But with consistent, patient, and loving training you will find that others in the class will groan with regret when they see you and your Golden coming because they know it is near perfection that they will encounter. 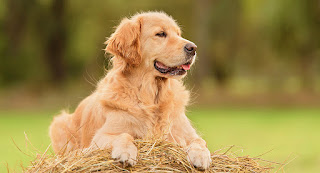 Beautifully Elegant---The feathering on the tail and stomach make them absolutely stunning when they move. Their posture is so erect and proud, it's almost as if they realize how gorgeous they are, and think ""Since I've got it, I'll flaunt it"".

But that doesn't mean that they aren't willing to let their hair down and roll in the mud (or other less attractive things), or jump in the lake or river with zero encouragement. The most amazing part is that unless they've gotten totally trashed, they can stand, shake, and they're beautiful again. How do they do that?

Owning one of these dogs takes a strong ego because when someone says ""Hello Beautiful"" there is never a question in their mind about who is being greeted. However, I did have a man call me beautiful once, but my Golden wasn't with me!

Empathetic---They are masters at sensing your mood. Just because they may be napping on the floor doesn't mean they won't jump up and be exuberant with you if you are celebrating. Likewise, they are more than willing to lay their head in your lap, lie on your foot, and even lick away tears when you are sad.

Friendly---Even when they are deathly ill, they are up for greeting their public. And though they may hardly have enough strength to lift their head, the tail will start to wag and they will make their way to a friendly voice and encouraging words.

Spencer was a Golden that lived a happy life. He was healthy and had owners who would do anything for him. Of course they took him on vacation to a lake each year---there was no happier dog. One day, at 5 years old, he swam down the channel and back and for no apparent reason went into shock.

Even as his systems were shutting down, when he was taken to the vet's office to get help, the first thing he did was to wag his tail at a lady who told him he was beautiful. He died about 10 minutes later. No matter how bad they feel their tail always seems to be able to wag in friendship.

People who love Goldens (okay, any dog) are a breed unto themselves. But I know the owners of this breed will all join me in saying, Goldens are the best!"