5 Easy Tricks to Teach Your Puppy

Tambah Komentar Edit
"Teaching a puppy tricks is not difficult. Professional dog trainers recommend beginning the training the day it comes home. A seven-week-old puppy is not too young. Teaching tricks is fun and encourages obedience and close bonding. 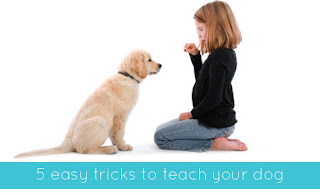 Two requirements are patience for the owner and treats. Puppies have a short attention span, so keep lessons between 10 to 15 minutes long and limited to a couple during a day. Puppies have a great sense of smell, and treats help encourage the behavior. Break the trick down into smaller movements, and when the puppy displays the desired movement, lavish him immediately with praise, affection and a treat.

While training the puppy, use a consistent verbal command. Say it only once before the trick instead of repeating it again and again. The goal is to have the puppy obey when the word is said the first time.

Tricks should be taught consecutively from easy to difficult. Let the puppy master one trick before going onto another. These five tricks are good beginners.

First, teach the puppy to sit on command. This trick is a building block for other tricks. Hold a treat above its nose, not too high, then move it over towards the back of its head. The puppy will naturally sit as the treat goes overhead. Immediate after sitting, reward it with the treat and give it praise.

Shaking hands is a simple trick. Tell the him to sit, then help it to lift up a paw. Now, say the command, shake the paw and give the puppy a treat.

Teaching a High Five is similar to shaking hands. Sit in front of him, and hold up your hand. Use a verbal command. If he tries to shake hands, do the High Five instead. Praise the puppy, and reward it with a treat.

Tell the puppy to sit, then sit in front of him. Place a treat on the floor in front of him and cover it with your hand. Say the command. The puppy will lean forward and down. Praise him, and let him have the treat.

Roll over can be taught next. Tell him to sit, then tell him to lay down. Next, hold a treat in front of its nose. Give a verbal command, and move your hand to one side. Praise the puppy when he rolls over. Practice rolling to both sides.

Reward the puppy for every small move in the right direction. Force is not needed because the it is a learning process. Every little move will lead to a completed trick."