Dogs Benefit The Health Of Your Child And You

Tambah Komentar Edit
"In a recent study conducted by State University of New York at Buffalo shows that children that live with pets during the first year of their life are healthier than those that do not. It is believed that exposure to pets early in life can stimulate the immune system to do a better job of fighting off infections.

Cats also seemed to have a beneficial effect, but not as strong as dogs.

Previous studies have also shown that future allergy risk are decreased when children lived with a pet during infancy. Early exposure to certain bacteria that is carried by our pets acts similar to a vaccine for children. 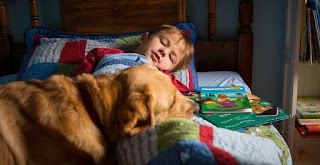 These recent studies do not surprise me in the least as I believe it has always been obvious that there are health benefits to owning pets for children and adults.

It has been common knowledge for many years now that owning a pet can lower stress and anxiety levels. Pets have long been used in hospitals and nursing homes due to their ability to aid in healing physical and emotional problems.

Owning a pet can lower your risk of having a heart attack. Pets are beneficial for those that suffer from mental struggles such as depression and bipolar disorder. Pets also play a huge role in helping people become more social and boosting self esteem. So it is clearly good for us to own pets.

As a long time dog lover and new mother myself I was overjoyed to hear the news of these recent studies involving dogs and infants. I have had many people try to tell me that I shouldn't allow my dog in the house anymore because of the germs. Now, I can tell them that they should allow a dog in their how because of the germs. I find that a little ironic.

Of course, I could have already told you from watching the interactions of my seven month old daughter and my dog that it was a beneficial relationship.

Our dogs are so much more to us than just our best friends and protectors. They are also our healers. We have so much more to learn from the animals that we befriend than we have ever realized. We have just began to scratch the surface of what benefits we gain when we open up our hearts and our homes to pets.

So the next time you come in the house to find your dog on the forbidden couch or in the forbidden babies room-- just remember, there are more benefits to that dog being around then there are drawbacks. So suck it up and give that dog a hug."