Tambah Komentar Edit
"Firstly, we would like to take this opportunity to thank all our customers for your continued support this year and to wish everyone a

Very Merry Christmas and a Happy and Healthy New Year!

The Street End Farm Elves are still hard at work putting orders together so there is still time to do some last minute bird food shopping before Christmas! 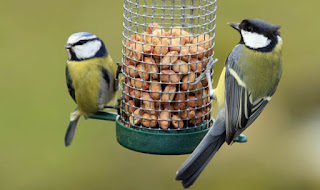 The last date for orders to ensure delivery before Christmas is Wednesday 21st December.

What a difference a year makes! This was the farmyard a year ago - knee deep in snow and a real challenge to get our orders out to our customers. And today - a balmy 8??C. That is what I love about the UK -the unpredictability of the seasons! However it does make planning for a bird seed business an interesting challenge!

The warm weather has encouraged the Plain Canary Seed which was left in the ground after harvest, to re-sprout and go mad, and the ground is acting as a wonderful haven for the pheasant and partridge that are hiding from the shooters on neighboring farms!

There are two breeds of Partridge found in the UK; the favorite Native English (or Grey) Partridge, and the imported (French) Red-legged Partridge.

When I was a child (back in the 1960s!) there was an abundance of Grey Partridge in the UK. However, sadly, over the years the numbers of breeding pairs have declined drastically and they are now on the UK Red-List as a bird of conservation concern. The reason for their decline is multi-factorial, but probably the main contributor is the poor survival rate of chicks. Reduced availability of insects, aligned with fewer weeds in cereal crops, less 'set-aside' land and more predators such as birds of prey have made it increasingly difficult for Grey Partridge chicks to survive. If you also add in the impact of bad weather, then even on a chalky Downland Farm like ours, the Greys have a tough time.

Grey Partridge fly in groups called 'coveys'. They fly close to the ground and their wings make a lovely characteristic 'whirring' sound.

At this Festive time of year, it will be the Red-legged (or French) Partridge which will be found in the Pear Tree!

The Red-leg was introduced to the UK in the 1600s by King Charles II, who brought them from France to use as targets for shooting. And that is still true today. There are vastly more Red-legged Partridge in the UK Countryside because they are bred, reared and released as Sporting Game.

Ironically, these birds naturally prefer to run, rather than fly - I am not sure I blame them! Perhaps it is years of being shot at!

These Partridge are larger than the Grey Partridge. They have a characteristic white chin and throat patch.

The females do have life sorted. They can often build two nests, lay two clutches of eggs, raise one clutch and leave their men to raise the other one. I must admit - they seem to have better organizational skills than I have!

And last but not least.............. we have been working hard on a new website which we will be launching in the first week of January 2012. The website will have new features and information and a fresh new look! To celebrate the launch and to say thank you to all our customers for your loyalty and support, there will be a Special Promotion running throughout January - more information to follow - but put a note in your diaries to visit us at  or  in the New Year!

Well it just remains for me to wish everyone a Very Merry Christmas and to thank you once again for your custom.