Tambah Komentar Edit
"In eyes of humans birds are likely to be among the most peaceful and calm creatures. However, such an impression might be easily dispelled if to look at huge birds of prey. They can outrange even some aggressive mammals, as their habits and lifestyle is related to hunting, attacking and meat-eating. Some of them were honored in the list of top 5 furious birds of prey.

It is not for nothing one of the Ukrainian troops' division is called Erne. This bird species is also called golden eagle that is national symbol of about 5 countries in the world. Fierce character of eagles scares most of the small species, as cruelty is in its blood. If it hunts a small turtle, it won't eat immediately or at once. The erne is rather fly high and then drops a prey into the rocks. In Mongolia these eagles are even used in hunting alongside humans; where the hunter smears, the flying predator will kill a dozen of animals for pleasure. 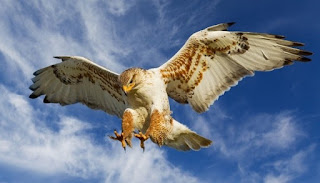 Butcher bird is very small, but its psychotic imagination speaks on its cruelty. This bird is a true maniac among bird species. Notwithstanding an ability to eat some insects while flying, it hunts small rodents. Generally, this bird easily pins its victims on tree knots and bites it slowly. Butcher bird has tenacious beak, cruel temper and a good appetite.

Vultures are well-known birds of prey in Africa. Most species of vultures are quiet, patient scavengers, but black American subspecies of brown vulture has a significant defect in the breed - a weak sense of smell. Therefore, usually these birds follow normal vultures. Sometimes they even follow birds of prey in groups and when meal is found they essentially take it from a real owner. Groups of black vulture also hunt animals in motion, usually taking the offspring.

Kea parrot is distributed in New Zealand and is famous for its irritating behavior and scream it produces. Kea is incredibly curious examining everything unfamiliar with the help of beak, attacking cars, picnics and backpacks with things. Trash bags are, of course, the most favorite leisure. But the worst thing in their behavior is that they bite sheep, thus eating them by piece alive.

Pelican is probably the most insane bird in the world. The key thing about this species is that they feed of semi-passive way. The biggest beak in the world allows them eating prey alive, including ducks, pigeon and penguins in Africa. Every living thing that gets in the beak of a pelican is doomed to flounder helplessly in hydrochloric acid gastric juice with no hope of saving the resistance."