Why You May Want to Avoid Clipping Your Bird's Wings

Tambah Komentar Edit
"Should I clip a bird's wings, well this is a question that many ask, including us. When we bought our pet bird, Charlie, our Quaker Parrot, nearly a year ago now, he had already had 1 wing clipped. The bird breeder suggested that one wing is all that is needed to be clipped and it would be much safer for him and that most pet birds have this done. We left Charlie with only one wing clipped for many months, it took quite a long time to grow, but in that time he would try to fly off quite often, especially when something startled him or if we weren't paying him enough attention. He loves to sit on our shoulders on our bird bib, which is a clothes protector from bird droppings. If we didn't put him on our shoulders enough he would fly off.

He would always crash land and often hurt the side of his face, always the same side which happened to be the side that the wing had been cut. It would bleed and take awhile to heal. My son Luke, his girlfriend, Sarah and my self didn't like this at all, we were worried that he would hurt himself permanently. We would panic every time he flew off. 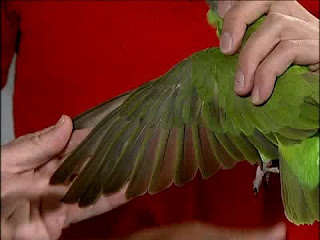 We thought maybe that we would let both wings grow as we thought that it would better for Charlie and safer. So we looked up different sites on the net and borrowed books from the library to find out more about clipping birds wings. We ended up being quite confused. There were so many different opinions.

We decided that letting both wings grow out completely wasn't a good idea at all. We read stories like, people that had let their birds grow back both wings and then their bird flew away and was never to be seen again or flew into windows and onto the stove, into fish tanks, into toilets etc. Another story was that a bird owner let their bird grow back both wings because they felt it wasn't right to clip them and then their bird flew over their fence into a neighbour's back yard. They immediately ran over to their neighbours to collect the bird, but unfortunately the neighbour's cat had got to the bird first. Imagine how that would have been. I felt so sad for that bird and the bird owner and thought that we can't let Charlie grow both wings. So should I clip a bird's wings, yes, we now believe that clipping both wings is the best thing for our pet bird. It is still probably an individual decision that every one has to make.

We have now cut both wings and have found that Charlie is much happier. He will still fly off now and then but no where near as often as he used to. When he does he is much more centred and only flies a short distance. He lands perfect every time, no more damage to his face. He doesn't have enough lift to get over our fence, unless he is high up in one of our trees in the back yard, so we have to watch him all the time when he is outside.

We believe that clipping wings is the best thing for our Quaker Parrot, Charlie. I also believe that clipping wings is a personal decision that pet owners need to make for all pet birds, including Cockatiels, Budgies and Parrots etc. It is a decision that all bird owners need to make depending on their own circumstances, just like any decision we make for all of our pets. Our bird loves to get out of his bird cage all of the time and sit on our shoulders on a bird bib and also loves to get outside on his outdoor gym, as we call it. If we didn't clip his wings he may not be with us today."