Advice For When And Where to Use Studs For Horses

Tambah Komentar Edit
"Studs have been used in horseshoes for a long time in the same way that footballers may wear studded boots when on a slippery surface. The purpose is to give the horse extra grip particularly when turning, changing pace or just on generally slippery ground. They can make your horse more foot sure and therefore more confident, which can give them a competitive edge on competitions. Studs were primarily used when competing outside on grass however some riders have now started using them indoors to help with tight or tricky turns. 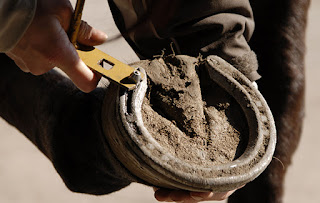 You should not use studs when riding on concrete or hard surfaces unless they are specially designed road studs as they will change the angle of the hoof and can put additional stress on the joints. Studs should be removed immediately after competitions and horses should never travel home still wearing them. Likewise horses should never be turned out in the field wearing studs as they pose a risk to themselves and other horses.

When using studs you will first need your farrier to create stud holes in your shoes. They will do this at the time of shoeing. Once the holes have been made it is recommended to insert stud sleepers or cotton wool which will keep the hole clean and will be easily removable. The day before a competition you should clean out the stud hole, this is easily done with a shoe nail. Then using the tap, make sure that the holes are threaded so the studs will be screwed in easily. Plug the hole again with a stud sleeper or cotton wool and you are ready to go. If you are using studs for the first time, give your horse time to get used to them before using them at a competition for the first time.

It is recommended that you have a plastic container that can be sealed to keep your stud kit in. You will need studs, a tap which often has a spanner on the other end to tighten the studs, cotton wool or sleepers.

There is controversy over how many studs to have in each shoe. Some experts suggest that there should be two studs in each shoe so as to balance the foot and theoretically reduce the strain on the joints; however, some say that pointed studs pose a risk to the other leg if they come in contact. If studs are used correctly on the right ground they should sink in and therefore not put the hoof at an unusual angle. The problems will come when studs are used on harder ground and are not able to sink right in."