When You Own Two Dogs - Benefits of Having Multiple Dogs

Tambah Komentar Edit
"It is not a bad idea to get another puppy as a companion for your dog but this is indeed a challenging task. Some multi-dog owners feel that their life is complete and much more interesting whereas some just pull their hair and get frustrated on the simplest of things. I was randomly reading up on owning multiple pets and it turns out that if you have 2 dogs, you should never treat them as equals as that only encourages fights and unnecessary chaos. Pack position is important to dogs, and treating another dog as being equal causes more jealousy.

As human beings, we believe in democracy and equality, but we need to understand that being equal goes against a dog's nature. It makes sense if you think about the fact that dogs spend most of their time playing games that establish their dominance like tug of war and wrestling. Of course, playing favorites is easier said than done. 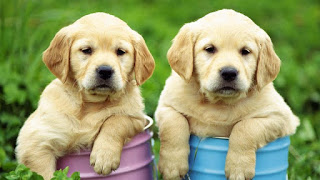 Some tips that I would like to share would be to train your dogs separately first, and get better control over each of them individually. It will help you to understand their behaviour and actions better. Your voice should be enough to control both of them, rather than a leash. They should recognise you, and your family, friends etc as the alpha or the dominant beings. Make them understand that being aggressive with other human beings is completely unacceptable. This would help you in situations where you would definitely not want to stick your hands between two sets of sharp teeth. A dog whistle helps you immensely in training your dogs effectively. You can get a silent whistle from:

Training the dogs separately will help you figure out the dominant one. Let's call him the alpha dog while the other dog can be called the omega dog. The alpha dog is the one that holds eye contact with other dogs the longest, wins at games like tug of war, generally tries to dominate the omega dog and tends to be more aggressive. He establishes through his behaviour that he is the superior amongst the two in the household. Dogs can be very competitive in packs. The alpha dog needs his ranking reinforced by being fed first, going through the door first and even receiving your attention first. If he continually indulges in mischief, then this is his way of telling you that he needs more attention from you. The best way to feed them would be to do it in separate rooms. Mealtimes should be peaceful and it will also prevent the alpha dog from stealing food from the omega dog's plate.

Although the alpha dog needs all the limelight, do not completely ignore the omega dog. Give him attention too, just that first give it to the alpha dog and them to him. Problems tend to crop up when you start feeling bad for the docile omega dog and try to make things fairer. If you see that your dogs constantly bicker, then let them. Till the time you don't notice any significant injuries or blood, don't panic as most of these dog-fights are just play. You need to act responsibly if one of your dogs falls sick as many of these diseases are contagious and the best thing to do is to keep your dogs separately for that time duration.

Pay attention to them and groom them daily. This will help to make them obedient towards you and the bond between you becomes stronger. As long as you have concerns they might fight, separate them when you are not able to supervise them. Although the dogs must develop their own social order, they must remember that you are still in charge, the actual Alpha of the house. Don't make yourself crazy thinking what a dog has in his mind.

It is beneficial for you to let the dogs develop the social order without your interference and it always helps if you remain patient and cautious during the time when the dogs are adjusting with each other."