Have You Ever Experienced This? laryngeal paralysis

Tambah Komentar Edit
"Noticing when your pet's lifestyle changes, is perhaps the most helpful preventative measure for any ailment. Sometimes it can be as subtle as being lazy because it's too hot today, or even as extreme as limping or even barking oddly.

A strange and often rare condition known as laryngeal paralysis has raised a few questions. You may notice your dog's bark sounds a little hoarse, or even gasping for breath after a short run or after drinking water. When this occurs, what is happening is that the muscles around the larynx, the channel that air travels through and which also helps control vocal noises, becomes uncontrolled. The muscles around the larynx relax, which can lead to breathing problems during exercise, eating, or drinking. 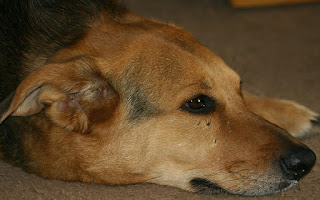 Oddly enough, the first signs are a simple change in voice. Your dog's bark may sound hoarse or even squeaky, rather than robust and solid. Unfortunately, this can lead to difficulty breathing, and as it becomes worse, can lead to fainting from lack of oxygen or hyperventilation. Your dog can even become exhausted or suffer from heat-stroke due to their inability to pant properly in order to cool themselves.

A friend recently adopted a dog from the pound-Sandy, who is half German shepherd and half corgi. The purpose of the adoption was to find her a good home before she was euthanized by the pound. Unfortunately, Sandy had some issues when she first arrived. She became sick, and struggled to drink water or even eat. After a course of antibiotics, her health returned...somewhat. We quickly noticed that her bark was odd. It was hoarse, as though she was still sick. As time went on, the bark stayed the same, and we began to notice that she had trouble eating and drinking all the time, usually coughing during and after mealtime. Luckily, we quickly realized what was happening and were able to take precautions to handle her properly.

While the cause of laryngeal paralysis isn't clear, there are still other issues to consider which may be the cause of these symptoms. Heart and lung conditions can also lead to similar problems, which would need to be addressed or ruled out by consulting with your vet. Hyperthyroidism can also have very similar effects on the throat and larynx area, affecting the vocals, breathing, and ability to eat or drink as well.

Treatment varies depending on the extremeness of the situation. Dogs that are older can develop these conditions, though it is more common in Labradors, golden retrievers, huskies, and other large dog breeds. Usually, laryngeal paralysis will be mild to moderate, often showing up after they go for a walk, at mealtime, or when they begin panting to cool down. These are all very common things on a dog's to-do list, but unfortunately, when your dog struggles with these problems, it is recommended to limit their activity, as well as avoiding hot or humid environments. Maintaining a healthy body weight will also lighten the condition. Mild sedatives can decrease anxiety to reduce panting to improve breathing ability. You can also utilize corticosteroids to decrease inflammation and swelling of the area affected.

Surgery is another option, but should only be used for acute conditions of laryngeal paralysis, since the process can often leave the dog susceptible to pneumonia. During the surgery, one portion of the larynx will be fixed to an open position to ensure that air can pass properly into and out of the lungs. This can help with panting, eating, and drinking, but will also leave them vulnerable to lung issues, such as aspiration of food or water, which, when entering the lungs can cause infection. Dogs that receive surgery should still be treated as having a mild case of laryngeal paralysis, and should be watched carefully for pneumonia-like symptoms. Their symptoms can be worsened by extreme activity, especially in a humid environment. Though everyone wants their dog to enjoy a happy active lifestyle, surgery won't necessarily enable your dog to become more active. Before you consider surgery for laryngeal paralysis, be sure that there isn't an underlying issue, such as a swollen thyroid gland or tumor that is causing the problem. With the proper attention, these issues can be resolved to clear up the issue.

As both dog owners and lovers, we need to always be aware of how our dogs act, and how they should act. Study their habits so you can quickly detect slight or even extreme changes that need our attention, because they could be signs that something else is wrong. Hopefully, however, these symptoms will be nothing more than a bit of gas or a smile waiting to appear on a healthy dog's face."

Belum ada Komentar untuk "Have You Ever Experienced This? laryngeal paralysis"