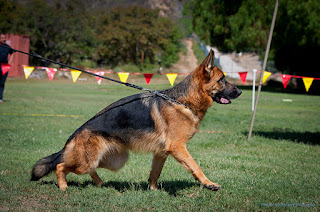 These dogs have perhaps the best ability to be a perfect watchdog. They remain so alert throughout the time that they are aware of both unknown people and unknown dogs at the same time. So, it is a must to provide a dog a good training on socialization if the dog is going to live around other animals.

Dogs of this breed have great energy level and hence, require great amount of exercises on a daily basis. So, the coat of the dog might be a matter of headache. In order to get rid of the dirt and germs, brush the coat twice a week. Moreover, this type of dogs is known as heavy shedder of body hair. As a result, if you have an allergic person at home, don't bring such a dog at home.

A German Shepherd is usually longer that what its height is and in case of the modern variant, the body slopes towards the back though its hind legs functionality is based on that of a spring. Here are some of the statistics of the dogs of this category: -

While the male dogs weigh between 75 to 100 pounds, the female ones weigh between 60 to 80  heights of a male and female dog are almost the same. A male dog has a height of 24 to 26 inches and that of a female is 22 to 24 inches.While talking about the life expectancy, a dog of the German Shepherd category has a lifespan of about 10 to 12 years.

So, in case you are a dog-lover, go and get yourself a German Shepherd Dog today as true goes the saying 'Dogs are the best friend of men'."