Tambah Komentar Edit
"Do you have the sweetest, most affectionate, well-behaved dog anyone could ask for-until you put the food bowl on the floor? If this sums up your beloved pal, there are many variables to consider. Some owners find it cute that Scruffy guards his food bowl since Scruffy limits his objection to a show of teeth and a little growling, or perhaps grabbing up his bounty in his mouth and running to a safe place to hide away. And when Scruffy only weighs eight pounds, it's easy to adopt a ""So what?"" attitude. This is the relatively harmless version of what we call ""food guarding,"" which is, indeed, a form of dog aggression, and can be a precursor to worsening aggression in the future if not kept in check.

Let's switch this scenario from cute little Scruffy and talk about 70-pound Igor, which can present a far more serious manifestation of food guarding, even if Igor usually is a big, lovable lug. Perhaps you drop a scrap of food on the floor while making lunch, and unbeknownst to you, Igor has already mentally claimed the scrap for himself. You reach down to pick up the scrap, and Igor and his teeth lunge straight for your face. Now, suppose it's Igor vs. your toddler in the same scenario. Have we made our case yet that food guarding can be serious? No matter what a great dog he is the remainder of the time, dog bites can be very dangerous, so it's important to recognize the very real risks and take prompt steps to quell this form of dog aggression. 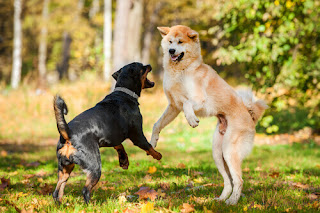 Domesticated though they are, dogs still do possess inherent instincts. Guarding their resources-in this case, their food-is actually a fairly normal dog behavior. However, if the dog has been well socialized, he won't feel the need to guard his food, especially in your home-he'll know that he has plenty and that he doesn't have to keep predators away. (The predators, in this context, being you, your family, your visitors, and your other pets). But if this dog aggression trait has shown itself with no signs of going away, you will need to address the behavior. Caveat: If you are ever concerned that your dog may bite you due to any kind of dog aggression, including food guarding, do not attempt to re-train him without the guidance of a dog training professional. Dog aggression is never to be taken lightly.

If you have a new puppy, fending off dog aggression related to feeding can often be accomplished by simply teaching him early that you are, indeed, the hand that feeds him. You may feed the puppy by hand, one bite at a time, while petting him and soothing him with your voice, instilling the idea that you are his provider, not his predator. But if the puppy doesn't adapt to this training, or if this type of dog aggression is occurring with a more mature dog-if it's obvious that he is ""set in his ways,"" as we would say in human-speak-then it may be best to isolate him while he eats so that any other pets in the house are getting their fair share, while also averting situations in which the food guarding dog may decide to bite. Feeding him in his crate, for example, may be the best option you have until the situation can be properly dealt with by a professional. Of course, isolating your dog during feeding time doesn't negate all the circumstances in which food guarding could occur (remember Igor and the kitchen scrap), so it's important to get busy with that training right away."