Tips To Raise a Baby Bird On Your Own Naturally

Tambah Komentar Edit
"Raising a pet is an art that too when your pet is too young, it becomes extremely difficult. This happened when I was in my college. I was waiting to catch my bus at Pittsburgh when I saw something tiny stuttering near my legs, it was a baby sparrow. It should be hardly a year old. It was heart breaking to see the young one struggling to walk away from its mother. I grabbed her as soon as I could and rushed her to my house. My mom was not very pleased with the idea of bringing a bird as we've had some pretty tough experiences earlier raising pets. She was too young and so I couldn't bear the thought of leaving her on the pavement. I then left to my university for the day. I bought some cotton pads and corn flour to keep her warm and healthy. But it was tough to feed her as she was too little. 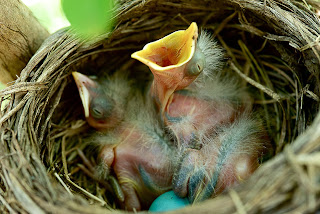 I tried to keep her warm by holding her in my palm. On the second day I held her close and took a nap. When I woke up, I found her dead in my hands. It was a pitiable sight. I called up my friend and broke into tears. He comforted me. I felt bad for a couple of days and the pain gradually faded away along with the course of time. It is therefore extremely essential to raise birds with the right amount of knowledge and information. It brings immense joy to see them grow up into strong birds. But there are certain steps that need to be followed when raising young birds.

It is comparatively easier to raise a bird which you had purchased because you will know the breed and the type of food it actually needs. It becomes an easy job to feed them. But if you want to raise a bird that you found on the roadside, it is a bit tough as you need to identify the breed and understand what needs to be done. You should know what kind of food suits them the best at their age. There are basically only three things that baby birds require. That is food, security and warmth. You can easily take care of warmth by placing it in a shoebox that is filled with alfalfa or cotton. You can actually place a tiny cotton cloth so that it feels soft and comfortable for the bird. Make sure that it receives water at all times.

There is going to be one thing that you need to compromise on if you wake up late. You have to get up early in the mornings because they start feeling hungry very soon. It is necessary to feed them once in every two hours during the day. Decide on the right tool to feed the bird by looking at the size of its beak. Use a dropper for giving food to small ones whereas bigger ones need something like a spoon. You might have to clean up the cage often as they tend to eat a lot and discharge a lot of fecal matter. Initially small birds can be placed in smaller cages but as time grows by, you need to shift them to a larger cage where they can learn to spread their wings and develop their muscles. It is also advisable to place a larger bird along with the small one.

This actually encourages them to learn flying by themselves; you also need to protect them against other animals or pets in your house such as dogs or cats. If it was some sort of material that you possess, security providers such as ADT Home Security Systems could have taken care of the job. But for birds, you need to be extra vigilant and safeguard them against cats and dogs so that you get to see them hoping around your house bringing you immense joy and satisfaction."