The supply of food for these birds in Mauritius was abundant too, not to mention easily accessible. For birds, the use of flight is mainly for self-protection and for hunting food. Take this away, and the next generation of Dodos adapted as flightless birds. 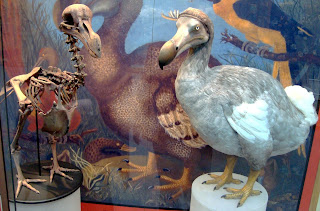 The Dodo stands at a range of 2 to 3 feet. It was always believed to be a dumb species by the early settlers in the islands of Mauritius. On the contrary, Dodos are pretty intelligent; they just got used to the comfort of their habitat and treat no one as potential threats. One of closest relatives to this flightless bird is the Rodrigues Solitaire, which is another extinct species of birds residing in the same area. There are no accurate and live samples of the Dodo as it went extinct in the 17th century due to the hunting of Dutch Sailors and their domestic pets.

The Dodo and its friendly nature that it adapted became the trigger for its extinction. Some blame the laziness of the first settlers in Mauritius, as they resorted to hunting these birds which presents no challenge at all. Due to the susceptibility of the Dodos from hunters and domestic animals foreign to the lands of Mauritius, they faced absolute extinction. Since the point of species extinction is not yet taken into account at that place in time, records were not kept. In result, Dodo's were treated as mythological creatures until the 19th century.

Since the discovery of fossils and physical evidence concerning Dodos, society came to know that extinction can be brought upon by humans, whether it be plants or animals. The extinction of these birds made way for researchers to take note of species population. As a sacrifice for other animals, Dodo helped people realize what animals or plants are endangered. It is a blessing enclosed within a tragic sacrifice as some may say."