Robins In The Winter - Why is the European robin associated with winter?

Tambah Komentar Edit
"The robin is a proud bird. It is a nervous little thing, however. Used to scraping about on the forest floor and picking up beetles and other creatures, the robin is a bird that we are all used to seeing at Christmas. The biggest reason that we will see the robin during winter is that the ground is no longer an acceptable feeding place. This is for a few reasons- there is either that much snow on the ground that it is not reachable, or the temperature has plummeted so low that the ground has become hard, or frozen, to the point where the robin cannot penetrate it any more. 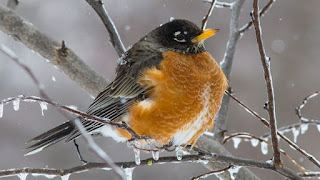 During winter the robin may switch from floor scavenging, to berry eating. This means that they will search out bushes, which is why they are more likely to be seen around a forests edge than they would be during the warmer months. The robin is not likely to set up nest in a bush, unless it is far away from other people and birds, but they will spend a lot of their time flitting from one bush to another tasting the berries and eating what they can. This is another form of their scavenging, only this time they are choosing a higher platform than the ground.

Human beings can of course help robins with their food problems, and also emulate the food scavenge that the robin is so used to. It is simple enough. All it takes is a handful of mealworms, or other such delicious treats, and the knowledge that robins are nearby. A little patience and you will have yourself a garden full of the gorgeous Christmas birds in no time. It is important to only put a little food down at a time, for that way the birds will eat it all, and it will deter rodents from coming to scavenge.

Robins are gentle creatures that have learned how to live with humans unlike a lot of species of bird. They are often seen by gardeners as they flit around the garden throwing up the leaves in an attempt to find a bug for food. In the winter the Robins become a lot bolder and approach humans a lot more in the hope of finding some food. Most of the time people will leave food out for Robins because as a species their numbers are dwindling and they need all the help that they can get if they are going to survive into the years ahead."

Belum ada Komentar untuk "Robins In The Winter - Why is the European robin associated with winter?"