Tambah Komentar Edit
"It is no surprise that most people confuse golden retrievers with Labrador retrievers. This happens often and it's a common mistake among a few people, but as some people might be confused of the differences between the two, retrievers and Labradors have evolved differently. It's not only about the stature or the two breeds, nor the characteristic and the built and even the personality; but there are other things that make these two completely different from one another.

The biggest difference between a Labrador retriever and golden retrievers, looking at it in it their activity level, the Labrador is most energetic compared to the golden retriever breed. They love outdoors as much as we do and they are more active and they need a good amount of exercise on a day to day basis. Don't be fooled though. Golden retrievers are active, but not as much as the Labradors. Looking at the structure of the breeds, side by side, you will see a difference in the features of the body. Labradors are more athletic than retrievers and they have a higher percentage with muscle mass. 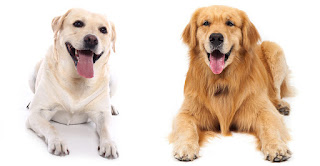 Next, you can see the difference between the two when it comes to their fur or coats. This is the most obvious of all when you compare the golden retriever with a Labrador retriever. The Labradors have dual-layer coats, with an oily outer-layer and soft under-layer. The outer-layer will help give them the property of being water-resistant. Another thing you need to remember is that the Labrador retriever has shorter length of hair compared to golden retrievers whose hair is particularly longer than that of a Labrador.Differences Between Labrador Retrievers And Golden Retrievers

Labradors have three different fur colors, which are black, chocolate brown and yellow and sometimes there are rare fur colors like silver or charcoal. Golden retrievers on the other hand have reddish brown to a light golden but most of them are mid-range in color.

The Labrador retriever, on the other hand, produces higher amounts of oil that nourishes the fur. The retriever needs to be groomed everyday just be steer clear from fur mats and many other possible problems. Labradors can be groomed at least 2 to 3 times in a week but once they start going through their seasonal coat change, then they too will have to go through the process of everyday grooming.

With this being said, you can no longer mistake Labrador retrievers for golden retrievers."