Tambah Komentar Edit
"I can still remember the sound of cars and the smells of many different people that the big city presented us on our last trip. The old man had taken us on a trip that landed us in ""high-scraper"" as dubbed by Tim, and while the situation had been somewhat stressful, there had been the conveniences of a comfy bed and soft carpet. And the bathroom was outside. But that isn't the case here.

To start, we'd packed early this morning, or at least I had done so (the old man never forewarns me of these kinds of plans). With bone in mouth, I waited at the door for the old man to pack up the car for another trip, which I presumed would be to visit the big city again. The luggage looked strange, and we weren't even loading up in our car. We were, in fact, loading up in Debbie's car. A strange machine, instead of a backseat, they have a box that holds their stuff. Occasionally, I have seen Izzy enjoying the breeze from back there, though he prefers the window seat which I'm sure we'll have to argue to see who gets it. 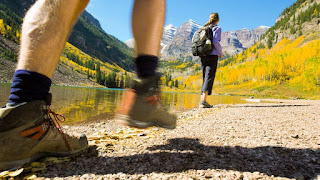 The old man had won the seat by the window, leaving Izzy and me the backseat to ourselves. We took turns checking out the view, but for the most part we just took in the refreshing breeze that blew in through the open windows.

And the result of this particular trip has landed us in the biggest park I have ever seen. There weren't other dogs or people though (not even the human-pups swinging and racing around in the sand. Instead, we found ourselves in a single cabin that overlooked a huge pond. No neighbors, no cars, and no familiar sounds at all.

In place of all those things were new smells and a range of birds chirping and squirrels chattering in the trees (nothing out here of mine for them to dig up). All these things demanded our immediate attention, so Izzy and I wasted no time in beginning our investigation. Izzy took the left side of the cabin and I took the right. There wasn't much furniture in here and there were only three rooms. One contained the kitchen, there was the sleeping area, and the last was the washroom where the people bathed. Taking a bath every day seems a little extreme to me. I'm fine with...never!

With the house checked and secured, Izzy and I could move on to the outdoors, which would undoubtedly take at least a dog's year. But, we ran into a little trouble in this part of our job. If we wanted to go outside, we had to go with either the old man or Debbie. And as long as they were unpacking, there would be no outside time. I was patient at first, but they took forever. I had settled in with my bone well hidden the moment we got inside (I'm not telling you where it is). Really, the fact that people always seem to take everything with them wherever they go seems very silly to me. As long as I've got the old man, I know everything is going to be all right.

We did finally get outside, but by then the sun had begun to set. Without the city lights, things were much darker outside. A small light illuminated the porch area, but the trees had already begun to dance with shadows. That didn't stop us from exploring, and with a nose like mine, I'm sure I'll detect anything long before it spots us. Izzy led the way with our companions straggling behind. They didn't have to worry about sniffing every stick and rock like we do.

We made our way to the lake, checking out everything along the way. Though faint, I could smell only a few other people, but hundreds of other animals that had wandered across our path. But, that wasn't the strangest thing we encountered. Luckily I had my good friend Izzy with me to confirm what I saw because it had obviously gone unnoticed by either of our companions. The sun was gone and the night sky had filled with tiny lights and the  the moon wasn't alone. There were two of them- one in the sky and one in the water. The lake had its own moon too. I wonder what else is in there...

And that's when Izzy pushed me in."