Sporting and Your Dog, List of Dog Sports: Activities that involve dogs

Tambah Komentar Edit
"The comedian Albert Brooks once said, ""It's not necessarily a compliment to call a man lucky."" That kibble of wisdom holds true in the animal world, too. Training your pup to be a monumental sport dog is not a matter of luck.

Magic is a poor force when you're betting the trailer on something. You want to train your sport dog for every eventuality they'll encounter in the wild.

A top matter both of you will run into is going hunting after couch-potato-ING for a long period of time. A well-trained mutter is one that not only knows how to mark, but doesn't get a Charley-horse on its way to the prey. Of course you regularly want to re-train the dog, but occasionally you just want to take 'em to the dog park or for a nice long hike. 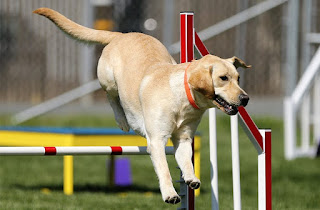 What type of hunting do you plan to do with your best friend? What's required of it? Speed, stamina, agility, resilience, drive, strength? Concentrate on those areas during a work-out. Another focal-point is to really amp-up the dog's hind quarters, back, mouth, neck, feet and shoulders. Face it, bubba... you're its personal trainer.

Go swimming, walking, running and jumping with the cur. Teach your canine - slowly and methodically - to follow you behind your bicycle. Not motorcycle. Dragging a dog at 40-miles an hour will really foul things-up. As they become used to following you on your bike, this will build the dog's muscles for the long-haul in the thicket.

Master and trusty retriever are preparing for a day in the woods without eating too much aspirin after the fact.

That also reminds us of diet. Over the summer months, everyone has a tendency to vacuum-up too many burgers and treats. Keep an eagle-eye on both of your bellies. A fat dog in the field is like wearing 60-pound boots. Works for scuba-hunting. Does not work above ground so well.

A sick dog on a hunt will screw-up both the pup's day and yours too. You don't want to have to carry your buddy back to the truck.

Grooming is also suggested. A matted coat, dirty ears and despicable teeth will only lead to increasing medical issues. You've spent a lot of time and treasure on your retriever. You wouldn't leave that swell, two-toned 1958 Chevy Bel Air run without occasionally changing the oil and doing maintenance required to keep the spit and polish from going down the toilet because it's worn.

Your pet is a living, working creature. Get the pup a physical.

A dog needs practice to remember how to hunt. And what to do when you're in the forest or marsh. Put a ball on the ground; take your leashed dog about 50-feet away from the toy. Unattached the retriever and issue the ""fetch"" command. You walked half as far as the dog, so the mutt has gotten twice as much out of the exercise as you have. The goal: Being able to drop the ball about 2-thousand feet away and having the animal perform a successful retrieve.