Tambah Komentar Edit
"The scents and sounds were astounding. If only you could've been there to see them with me. People everywhere were rushing like they had someplace to be without enough time to get there. Maybe somebody had stolen their favorite ball or was marking a spot in their den. Even the cars and bicycles rushed by in the streets while we just walked, or at least tried to.

Yesterday, the old man loaded the car up and we left to seek some adventure for the weekend. Our trip removed us from the regulars of our neighborhood and the friendly familiarities and placed us in the big city. The drive was fun, with a few stops where the old man let me out to tend to my necessaries, but mostly we just drove. And sang. Oh, the old man can definitely sing when he's in the mood. The radio played and we kept ourselves entertained. Ah, the magic of music! If only the car had a piano, too. 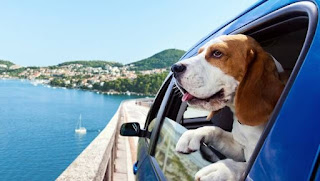 But we're here now, staying with the old man's son. He was the man that had spent a few days with us last year, along with his troublesome pup, Tim. I can't say that I didn't much care for Tim, but he was a rascally pup that could get on just about any dog's nerves. Fortunately, we're staying with him, so there isn't going to be any radical territorial disputes this time.

So, while the old man's son is off to work at ""the office,"" the three of us wandered around the big city in search of some entertainment. Well, at least the old man and I thought it was an adventure. Tim, however, was his annoying old self.

We hurry along, much like the others, just like we're trying to get somewhere we should've already been an hour ago. The old man is working fast today, his three legs working well to keep up with my four. Tim seems to straggle behind, breathing hard like he hasn't had much of a chance to get out and exercise regularly.

We stop when the food calls to us. A fella works his kitchen on the street-corner, heckling to an audience that always seems in a hurry to get things done. And though the cook clearly states something about ""hot dogs,"" the old man affirms that they are just franks. Regardless of whether they're made of dog or a fella named Frank, they smell pretty good. Tim and I share one, of which I take a bigger bite to ensure a better share of the meal. Tim's a small pup who is a little portly on the sides. He could appreciate the diet, even if it was only momentary.

After we filled our bellies, the speed was on again. A lady raced past us, rushing with her baggage as though a wild crocodile was in hungry pursuit. Izzy had once let me watch his picture-box, and I had seen those deer-like creatures run super-fast when crocodiles were starving for a hot meal. She was moving that fast. We just kept with our pace, though I did glance back to see if there were any crocodiles hot on our tail. You can never be too sure when you're in the big city...

It wasn't until the park and the pigeons that things calmed down enough so that we could absorb where we were. The park was lovely, just like home. We had green, grassy hills and a wide array of urban wildlife to chase around. Even Tim seemed to fall out of his ""I already knew that"" routine and went into ""discovery mode."" We all worked together, the old man sprinkling some seed that drew in the pigeons. Tim had little experience in this department, so I had to teach him.

""We stay still at first. Then, when they're munching on the goods, we pounce together."" I explained after Tim had spooked the first bunch away before the chase could really prove entertaining. After a couple of tries, and some more doggy-insight, Tim proved himself a natural at having fun in the park. Sniffing, spotting, and chasing-we did it all. And the best thing is we did it together."