Dogs In The Military: Facts You Never Knew About Military Working Dogs

Tambah Komentar Edit
"The military has been using dogs for as long as there has been war for everything from mine detection to communication to pure force when attacking the enemy. The Romans even had entire attack formations composed of specially trained dogs, most likely Canis Molossus, which actually originated in Greece.

In the United States, the first known use of dogs for military purposes was during the Florida or Seminole Wars in the first half of the nineteenth century. A few years later, the US forces used the American Pit Bull Terrier as a messenger and for protection during the Civil War. This same breed also became the official mascot for recruitment and publicity purposes for World War I. 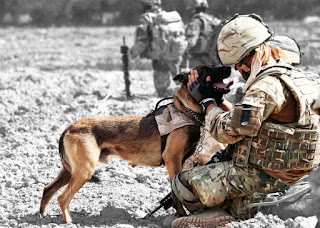 During the Second World War, dogs often replaced humans in medical experiments in order to reduce the risk to human life. They were later deemed heroes by the United States government, after a public outcry against the way this type of experimentation.

Today, dogs that work with the military are commonly dubbed K-9 or Military Working Dogs (WMD). Statistics from last year say that about six hundred dogs are currently in use among the US military in Iraq and Afghanistan.

After their training, these dogs are paired with a handler, who is a single individual that the dog can bond with. These teams usually stay together for at least a year, but very rarely for the whole time they work in the military.

The conditions for these dogs are harsh, just as they are for people. But the government and the public are trying to make changes to the way these dogs are handled both while in service and afterward. Until 2000, military police dogs, as they are known, were euthanized after they became too old to perform their tasks. This was especially common in the Vietnam War, where dogs were considered equipment and were killed in-country or left in the hands of United States allies.

Since then, the government changed the law so that another human could adopt them. Sometimes they become therapy dogs, but often they come into a home as a pet.

Recent controversial uses of dogs in the military include the intimidation factor. Most people have seen movies about WWII depicting German soldiers with German shepherds, but this sort of thing occurs today as well, for example at Abu Ghraib. While it is now known that dogs were used in interrogations at this prison, it seems very likely that similar techniques are used elsewhere, even when the public is not informed.

Earlier this month, advocacy groups have started making some noise to pressure the military into changing the status of dogs from equipment to personnel. Some of the issues they are drawing attention to is the lack of military care for dogs after they come home from deployment, which can be similar to the struggle of many soldiers.

The New York Times says that five percent of deployed canines come back with canine PTSD, a condition that develops after long periods of exposure to situations that cause hyper-vigilance, in other words, where you have to be on guard all the time.

Currently, not all dogs can be adopted, due to illness or other conditions, and members of the Armed Forces are fighting alongside civilians to get these regulations changed.

The fact that the military can use dogs for their missions is a testament to this animal's intelligence and adaptability. However, such use exposes them to trauma, both physical and psychological, that parallels their human counterparts who are also taking part in these extreme situations."