Tambah Komentar Edit
"Distemper is a virus that every dog should be vaccinated for as soon as possible after birth. The vaccination for distemper usually comes paired with the one for parvovirus and other potential viruses and issues dogs face early on. It is administered as a series that needs to be updated every one to three years. Hopefully your dog Kenny has been vaccinated for distemper and you are keeping his shots up to date. If he contracts this disease, what will happen? Is it always fatal? What can you do? You probably have a million questions about Kenny's health, so read on to learn a bit more about distemper.

Distemper is a close relative of the measles. It is spread from animal to animal through almost any kind of fluid, and is thought to be most commonly transferred when one dog coughs on another. It can also be transferred through urine, feces, and saliva. If Kenny has it, he probably got it through his nose from another dog's cough, by smelling something, or by sharing food or water with another infected dog. The virus can hang around outside of dog's body for about 30 minutes. This means if Kenny comes into contact with something a distemper dog used in the past 30 minutes, it can be transferred. Distemper starts by attacking the respiratory system, which is why pneumonia is commonly associated with it. It moves on through the body, affecting the stomach, urinary system and even eyes. Eventually it leads to various debilitating neurological problems. 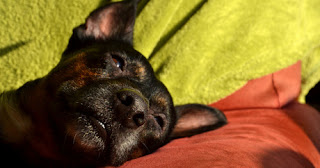 Signs and Symptoms of Distemper

Some of the first symptoms of distemper are coughing and pneumonia, as mentioned above, as well as a runny nose, runny eyes, fever, and refusal to eat. Later, vomiting and diarrhea will also be present as the virus makes its way through the stomach and intestines. Other telltale symptoms for distemper are a strange jaw twitch that looks like gum chewing as well as hardening of the pads on the bottom of his feet. Additionally, his nose will become hard. In the past, distemper was sometimes called ""hard pad disease"" because of this symptom. If left untreated, a huge array of other symptoms like seizures, weakness and disorientation may also present themselves in the neurological phase.

Kenny's ability to cope with the disease depends on how strong his immune system is. Because the virus is so destructive, it is often considered fatal, and in the case of young puppies, almost always is. But with older dogs, distemper isn't always fatal, and if Kenny's immune system is strong enough, he may be able to build up enough of a defense to rid his body of the virus. In some cases, dogs will be able to completely recover with no lasting side effects. In other cases, they'll recover, but still have a few of the remnants, such as hard pads on their paws. In the worst case scenario of recovery, their body will be rid of the distemper virus, but still be wracked with painful symptoms such as seizures. In some cases, the side effects disable the dog from leading any kind of decent life, and sadly, the only humane thing to do is put them down.

The prospects for distemper aren't good, and it's certainly a terrible thing to have to see your dog go through, but there's a bit of hope in the fact that it's not necessarily a death sentence for Kenny. Your veterinarian will do everything he can to help Kenny fight the virus and its accompanying symptoms and will be able to offer the best advice on what to do."