What is Sarcoptic Mange and How is it Different From Demodectic Mange?

Tambah Komentar Edit
"Sarcoptic mange, often known as canine scabies, is a skin disease caused by a parasitic mite called Sarcoptes scabiei. The mites burrow into the dog's skin and begin mating, with hair loss and itchiness as the two most common symptoms. Often, heavily affected areas will get crusty and/or red. They will be very irritating to your dog Leonard if he ever acquires them, and he'll spend the day uncomfortably trying to scratch them, often causing more damage and infection by doing so. If you've ever been to a poor country with many stray dogs, or seen them on TV, you might recall seeing dogs with patches of hair missing who are continually scratching at themselves. This is likely due to canine scabies making the rounds in their stray community. Malnutrition only makes the condition worsen.

Sarcoptic mange differs from domedectic mange, which may have similar symptoms, in that

the Sarcoptes scabiei parasite is not naturally occurring in dogs as the Demodex canis mite is. Thus Leonard has no possibility of developing an immunity to it, as often happens in puppyhood with the domedectic variety. Sarcoptic mange must be treated, and the quicker it's treated, the happier both you and Leonard will be. The quicker you get him treated, the less damage he'll be able to do scratching-and feeling constantly itchy isn't desirable for anyone, so he'll thank you for helping him promptly. 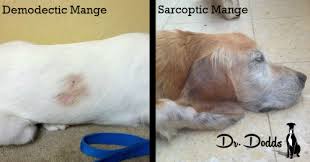 Direct dog-to-dog contact is not necessary for this type of mange to spread, as with domedectic mange. It is highly contagious and the mites can live off the surface of a canine host for at least a few days, and much longer if the conditions are right. While domedectic mange is usually transferred in puppyhood from mother to pup, the risk of sarcoptic range is always present if Leonard is in an area where another infected animal has been. The parasite can spread from species to species, such as cats, foxes, horses and even humans, though it prefers dogs (other types of scabies prefer different hosts), whereas domedectic mange can only affect dogs. It usually affects areas with the least amount of hair the most: elbows, ears, and stomachs are often worse for the wear.

Sarcoptic mange is a bit hard to diagnose and often misdiagnosed as a different allergy. But you can rest assured that once the diagnosis has been made for Leonard, treatment is quite effective. He'll first need to be shaved close to the skin so that the treatment can reach his affected skin more easily. Then he'll need to be shampooed and have a dip applied, most likely by your veterinarian. Your vet can recommend the best dip for Leonard, as there are various options (Amitraz, Lymdip and Mitaban are popular choices with effective results). He'll have to be dipped once a week or once every two weeks, for several rounds. In some cases, a topical ointment can be used instead of a dip, and there are also some choices in this case. Any other animals he had contact with along with should also be treated.

Once all of the mites are killed, Leonard's hair will grow back and he'll be happy as a clam again. His old bedding and other items where the mites may be currently living in can be cleaned with an insecticide, or else he stands the chance of getting re-infected by mites still on those objects. The best bet would be just to throw away everything, clean thoroughly and start fresh with a new bed. It lessens the risk and eliminates the need to use chemicals around Leonard's things. Leonard will thank you for it!"

Belum ada Komentar untuk "What is Sarcoptic Mange and How is it Different From Demodectic Mange?"