Tambah Komentar Edit
"It's not just that your buddy got out from under the bed on the wrong side; this behavior has been coming on ever-so-slowly. Think back. Over the past few months the mutt has been somewhat skittish. It's growled at you over things now that it never became upset with you before.

When your dog starts to exhibit signs of flying-off-the-handle, the thing that's driving them is their flight-or-fight instinct. It's also a hint that there's something they're afraid of.

Part of it might be your close relationship with your pal. They have a sixth sense that tells them you're under a lot of stress. Part of their social structure (and yours, too, for that matter) makes them look-up to an authority, like you, since you're the leader of the pack. If you give off an air of weirdness, it's everybody into the pool - they're going to buy-in and also get weird. 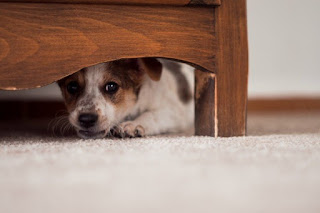 To tackle this kind of fear-based behavior, you need to take the reins. You're going to go into ""Emergency Training Mode."" Bring no treats to the exercise. This must be done in a calm, relaxed, understanding way. You need to be firm but fair, offering only a ""good dog"" as the reward.

As the canine gets with the program, doing a task like ""sit"" and ""stay,"" you'll need to add some distractions. You might see that the fear is coming back. Your job is to show your best friend that no matter what, they've got to take the initial command seriously.

As the dog sits, roll their tennis ball around. Make sure they continue to keep sitting. If they don't, repeat the exercise - calmly - until they comply. Try another thing to redirect their attention. Your pet has to relearn that they can trust you.

When you remain calm, the dog will chill and get the hints from the master.

Some fear-driven behavior can be an O.K. thing. If the mutt shakes like a leaf when a thunderstorm is flying overhead, it's whether you - Mr. or Ms. Ownerstein - deems it unacceptable. You'll know things are going off the ranch if your Weimaraner is scratching-off your shirt or projectile peeing in your face. That's not a bad, fear-oriented behavior to ignore.

It's alright if the dog gets a little antsy. But head this off at the pass. Once you know a cloudburst is heading in your direction, tell the dog to ""lie down."" Again, be mellow but serious. Nothing wrong with comforting the poor thing with some companionship and petting. And it's no crime if they look to you for a shoulder to lean upon in a stressful situation.

Your little job is to not psychoanalyze the dog. Your minor task is to address the behavior in a positive, constructive way. Respect goes a long way in any relationship.

A fellow named John Heywood usually gets credit for coming up with the phrase ""Love me, love my dog"" back in the 1500's. Some say it was St. Bernard who first coined it much earlier when he said, ""Who loves me will love my dog also.""

Let's take it to the next level. Respect me, respect my dog. Or as The Beatles once wrote, ""... the love you get is equal to the love you give."""