Tambah Komentar Edit
"One of the biggest difficulties poultry keepers face today is Red Mite or Poultry Mite infestation. These mites are becoming an increasing problem both in Europe and North America and are responsible for a significant reduction in egg production and increase in bird mortality on many farms and small holdings.

Early detection is important as if left unchecked the problem will quickly magnify. Red mites are very efficient reproducers and in fact an egg will hatch and turn into an egg-laying adult all within the space of seven days. In addition they can lie dormant for up to eight months, during winter, or in uninhabited hen houses, becoming active again in warmer weather or when a new host arrives. 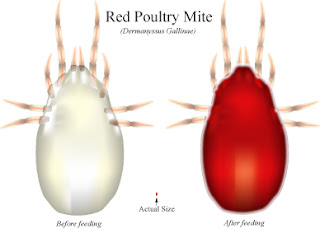 However red mites are often difficult to detect, especially for the inexperienced chicken keeper, until the infestation has taken hold. This is because they are only about .7mm in size and they hide in crevices and cracks on perches, walls and flooring during the day only coming out to feed on the birds for a couple of hours during the hours of darkness.

Often the first thing a chicken keeper will notice is their birds' reluctance to go back into the chicken coop at night. However with a bit of knowledge and experience it is possible to learn to spot these mites and treat them before they become too serious a problem.

The best time to spot red mites is the first thing in the morning when they are still full of blood from the chickens they have been feeding on. They will be a reddish colour soon after a feed but will quickly lighten in colour back to a grey/white colour during the day when they are significantly more difficult to spot. Early in the morning you should be able to spot various colours of these poultry mites depending upon when they fed on their host bird.

An early sign to look out for, which you can often see before you see any mites themselves are grey ash like deposits around the perch ends which is the waste matter from the red mites. If you then remove the perches, you will likely spot groups of mites in the perch sockets.

Effects of Red Mite on the Birds

Apart from showing a reluctance to go into the hen-house at night chickens will display restlessness during the night. They will begin to lose condition and their combs and wattles will become paler. Their egg production will drop eventually stopping all together. Any eggs produced will often have spots of blood on them. If left untreated the problem will lead to anaemia and eventually death in the birds, especially young chickens.

If you believe you have a red mite problem you should immediately clean and treat your hen-house and birds, with one of the many recognized treatments. In addition there are preventative measures you can take to try to avoid the problem in the first place."