Tambah Komentar Edit
"It's Spring break and the trail is almost at its pinnacle with a handful of major graded stakes lined up for 5 weeks and before period pre-Derby day. The enthusiasm seldom sinks as the most crucial, critical and acclaimed race is just a few weeks away from the entire racing fraternity and it won't be until another 12 long months of wait before the Run for the Roses is back to us.

Here's a peek into what's in store to test and line up the final probables for the big day on May 5th at Churchill Downs.

Of the various racing tracks approaching their grand finale to the Derby day trail, Turfway Park's Grade 3 Vinery Spiral Stakes on March 24th may bring out some potential contender for the final 20's field for Churchill Downs. 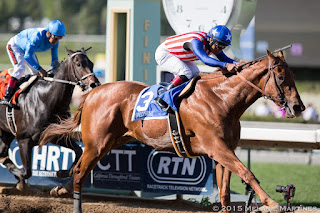 Even though the $500,000 purse prize may not still make it on the schedule of the major racers to be expected on the Big Day, the mile and 1/8th has previously contributed to the Triple Crown with racing thoroughbreds of the sorts of HardSpun (Kentucky Derby 2nd and Preakness 3rd 2007) and Perfect Drift (placed in Kentucky Derby and Preakness 2002 and second in Breeder's Cup Classic 2005).

What we must note, that the previous year, it was Animal Kingdom who captured the title and the feat this colt went on to exhibit at Churchill Downs dirt was an incredible one. Maybe we must keep a watch on this one.

Soon followed on 25th by Sunland Derby at Sunland race track the Derby trail will be targeted by another handful of three year olds that would race for another mile and 1/8th at the Grade 3 event offering $800,000 purse.

Though a recently inaugurated event, the Sunland Derby will be run the 10th time this year. Previously, race winner Thor's Echo made some ripple in the racing arena by winning the Breeder's Cup Sprint in 2006. Since then, the race has more or less been off the critical radar.

Gulfstream Park's Derby trail will mark the climax on March 31st with the Grade 1 Florida Derby with $1,000,000 in purse, highly paramount to the selection criteria for Derby contenders. The mile and 1/8th is highly critical as this is one out of the five grade 1 prep races that predict the future odds for the Derby line up.

Previously won by top favourite Dialed In in 2011, the Florida Derby was also won by past Derby winners Big Brown (2008 Kentucky Derby and Preakness), Barbaro (Kentucky Derby 2006) and Monarchos (Kentucky Derby 2001). This year, Union Rags, El Padrino and Reveron are expected to fight for the million dollar ticket to the Derby. This is one of the

Fair Grounds racetrack's Rose trail will hit summit with the Louisiana Derby on Fool's Day, April 1st; the Grade 2 event is set to offer $1million in purse at 1mile and 1/8th. The race won previously in 2011 by Pants on Fire will witness top Derby contenders Alpha, Z Dager, Mr. Bowling, Mark Valeski and the likes starting before moving into rest before the Run for the Roses.

Aqueduct would also be marking the pinnacle of the Derby trail through the much awaited Wood Memorial Stakes on April 7th. The Grade 1 event would offer $1 million in purses and run over a distance of 1 1/8 miles.

One of the most competitive and pre-Derby predictive races, the Wood Memorial has previously been won by some of the legendary race horses who later went on to create history with their memorable wins. The list includes Triple Crown winner Seattle Slew (1977); Belmont Stakes 1989 winner, Easy Goer; Kentucky Derby 2000 winner, Fusaichi Pegasus and Belmont Stakes 2003 winner, Empire Maker. This is another grade 1 Derby prep race from amongst 5 races.

On April 7th, the Santa Anita Derby at Santa Anita will surface another band of the top contenders for the Derby race. Grade 1 event offering a purse of $750,000, the race has contributed to the Triple Crown with Preakness and Belmont Stakes winner 2001, Point Given and also multiple graded stakes winner, Sidney's Candy. Due to its closeness with the Derby dates, the horses participating in Santa Anita Derby have made little ripples on the first day race of Triple Crown.

Arkansas Derby is another Grade 1 event scheduled on 14th April at Oaklawn Park that is also one of the five major prep races for the Triple Crown contenders. Previously won by Archarcharch in 2011, the race was won by Preakness winner Curlin in 2007 and also Kentucky Derby and Preakness winner Smarty Jones in 2004.

Todd Pletcher's Gemologist, Steve Asmussen's Sabercat and Baffert's Secret Circle are on this year's probable's list for the big event at Oaklawn before they head to Churchill Downs for the Derby.

Lastly, Keeneland will end its primary hunt for a top Derby contender with the Blue Grass Stakes on April 14th. Post this week, there are usually no major prep races scheduled in order to provide the horses a decent resting period before the Big Day.

The Derby trail has been getting hotter by the day and its almost the culmination of all trails to one final big event, the raceday.

To check more updates on the upcoming events, and the horse game ,log on to ."