What Do Dogs See? - Everything about a Dog's Eyesight

Tambah Komentar Edit
"We hear so much about what dogs smell, because they have incredible sniffers, have you ever wondered what your dog Lori sees? Surely they must see better than humans if they are used as seeing eye dogs. This seems logical, doesn't it? Actually, it may surprise you what dogs see, how well or how poorly.

The Ways Dog Vision is Better Than Human Vision

Lori detects motion far better than you do. In fact, they rely on motion to determine if what they smell is actually there. Something that is small and out of our field of vision, Lori notices much quicker than you will. If you have ever wondered how she knows there is a roach in the room and has already given chase before you even realize it's there, that's why. 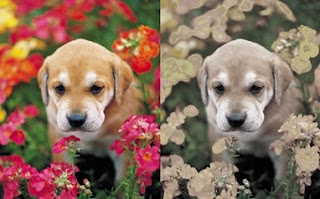 Ever wonder how Lori knows something is there even when the lights are off and you have to flip on the switch to see what she is seeing? That's because Lori sees in far dimmer light than you do. A significant portion of the central part of Lori's retina is made up of rod cells that appreciate objects in shades of gray. Conversely, our central retinas contain mostly cone cells. The trade off is that dogs are generally thought to be color blind and humans give up the ability to see in the dark.

Dogs have binocular vision, which means that they see with both eyes, with overlapping fields of vision. It has been long assumed that Lori sees two-dimensionally but this isn't the case. In fact, Lori ought to have excellent depth perception.

To be specific about what Lori sees in terms of color, vs. being completely color blind, it is widely accepted that dogs do not see the range in colors between red and green. Dogs do however see the colors blue and yellow. However, we can assume that they lack the ability to differentiate between sky blue, royal blue and navy. It's just blue.

Lori's visual acuity is significantly lower than yours. What this means is that she lacks the ability to make out the shapes of objects. As an example, an inanimate object that you see clearly, Lori can't make out. With the best guesses, given that Lori can't exactly tell you what she sees, her vision is about 20/75 or less. What does this mean? It means that she couldn't get a driver's license in most states.

Before You Feel Sorry for Lori

Although Lori may not see the same way that we do, this doesn't mean that Lori has poor vision. Consider a few things. Lori's ancestors and cousins, the wolves, do most of their hunting at night. The ability to see moving objects in the dark is essential for a hunter. The great thing about Lori having binocular vision is that this enhances her ability to hunt. If she were in the wild or if you are a hunter, imagine how her incredible depth perception might come in handy. She can judge whether a pray is ten feet away or 50 or even further. Most humans lack the same level of depth perception that dogs require.

And if you feel sorry for her that she can't see much color, it isn't necessary for them to see all the colors of the rainbow. And while you may love taking in the colors in nature, Lori loves lifting her head and smelling what she cannot see.

And lastly, what Lori lacks in vision, she more than makes up for in her ability to smell and hear. Lori can smell and hear something, or someone from great distances away. Lori's olfactory senses are said to be up to 100 million times greater than yours. Depending on her breed, she has between 125 and 220 million smell-sensitive receptors. To put this into perspective, Lori's sense of smell is so strong that if your blood sugar dropped to below normal range, whether she is trained or not, she would alert you to this fact.

As far as hearing is concerned, she's no slouch either. Her frequency range is between 40 Hz and 60,000 Hz. Lori can pick up sounds far lower and much higher than you can and from much greater distances away. Her ears can rotate to pinpoint exactly where a sound is coming from. So in many respects, Lori's senses are far superior to our own."

Belum ada Komentar untuk "What Do Dogs See? - Everything about a Dog's Eyesight "