The Rocky Adventure The Mirror And The Puppy

Tambah Komentar Edit
"Awakened from the dreams of sunny fields and the cool wind in my face, I was slightly irritated. It was sometime in the afternoon, and the last thing I remember was searching for a spot to bathe in the sun. The curtains had been drawn over my usual spot, so I had to find another. That led me into the spare bedroom which the old man seems to have forgotten. It was a place that possessed a bland and colorless smell. Some old furniture cluttered around a simple bed is where I found a spot of sun peeking through the window.

But now the sun has moved, revealing  someone else in the room. I could see the shape, but there was no scent or sound to prove it was there. Behind it, the sun was shining through another window, making the room even brighter. My entire atmosphere seemed to have changed while I was sleeping!

I leapt up and barked an alert to let it know I was there. As I moved, it jumped up and stared me down. When I moved to try to circle around it, it moved with me. Relentlessly, the apparition seemed to copy my every move. I didn't dare take my eyes off the creature. Smaller than I, the beast was much further away than I first thought. It was almost as if it was down a hallway.

I hopped down from the bed barking and yipping in an attempt to warn the old man that there was another creature in the house. I fled the room in search of the old man, hoping that he would be able to help figure out the mysterious creature.

Upon exiting the room, I glanced back to see if anyone was following. But, I was alone, just as my nose confirmed. Good, maybe it'll stay hidden until I get the old man in here. My nails clicked down the hallway with radical speed which put my heart's own pace to the test.

I leapt up on the bed and started telling the old man about the creature. Of course, I was slightly hysterical, so it probably sounded a little like this: ""mufff, awooof awahhha!"" Once I gained some composure, it came out clear enough that the old man should have understood. But, he just scooted me away from his face (my breath wasn't that bad) and proceeded to finish his nap.

This was no time for a nap. It was time to catch the intruder! He would have none of my nuzzling and cold nose treatment and used his pillow to create a barrier between the two of us. Normally, it would put a stop to the playful games, but this wasn't a game to me. I was serious and would have to prove it to him. I leapt over the pillow and onto his chest, in order to proceed with licking. This always gets him up, and this was no exception.

Though disoriented, the old man managed to grab his extra leg to help him stand. I leapt down and told him to follow me for I knew the way. Slow with his slumber's aftereffects, I managed to run back and forth between the two rooms before he reached the destination. But, when we entered, we were alone. I looked around, then at him. He just stared at me, irritation seeming to grow in his expression.

I had to show him the foreigner, if only to prove that I wasn't crying wolf. I circled the room, searching for scent and sound, but there was no sight of the creature. Then it occurred to me that it was probably enjoying the bed that I had left unprotected. Maybe that was what it had wanted the whole time, and was simply waiting for me to leave. 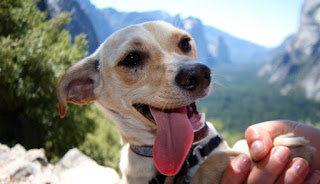 I jumped up and looked around. And behold, there it was, staring right back at me from its hallway. I called to the old man to come see too. He reluctantly approached, and there also appeared another apparition along with the first one. This one was far larger than the first and looked astoundingly similar to...

The overhead light flickered on, and I saw the old man had doubled. He stood here next to me, but also stood at a distance right next to the other creature. I leapt down from the bed, confused at first. I closed in on the hallway, noticing that the creature was also closing in on me. As we reached each other, I pressed my nose against the reflection. I guess even I don't recognize myself from time to time."